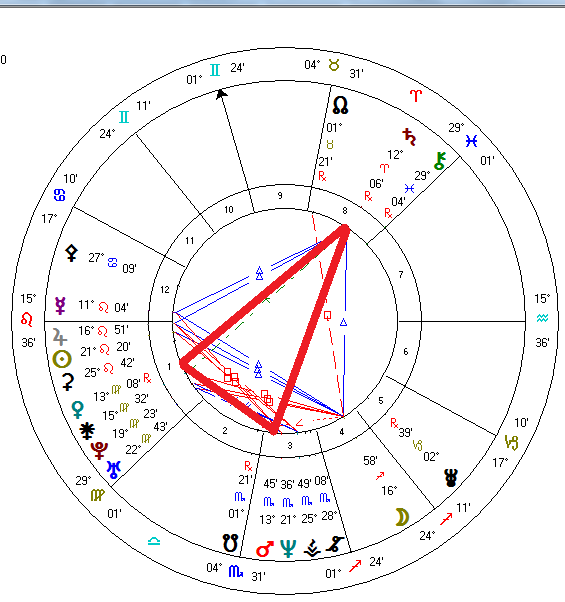 A Yod, also known as the "Finger of God,"occurs in an astrological chart when two planets sextile one another, and both form quincunxes with a third planet across the chart.

The resulting shape, when drawn on a chart wheel, looks like an elongated triangle -- or a long finger, which is where the Yod got its name.

The word ‘yod’ is related to the Hebrew word for ‘hand,’ and in astrology, the Yod is sometimes called the Finger of Fate or the Finger of God.

A sextile is a ‘soft,’ or beneficial, aspect, but a quincunx is a ‘hard’ aspect, one that brings trials and karmic lessons. As you can imagine, a Yod produces a sense of conflict as the soft and hard aspects mix their very different influences together.

A Yod also produces a sense of fatedness, of a karmic obligation that must be paid. In this configuration, the planets involved must learn to work together despite the challenging influence of the two quincunxes, but there is always a price to be paid.

A Yod signifies a lesson to be learned, something that must be given up. Will it be an old, outmoded behavior or belief? Whatever it is, the process will be difficult but ultimately good for the soul.

The planet that creates the long point of the Yod becomes the focal point of this configuration, and embodies the realm in which the greatest lessons must be learned. Yods signify the need for compromise in the realms of the planets involved, but also give the bearer all the tools they need to renew their soul.