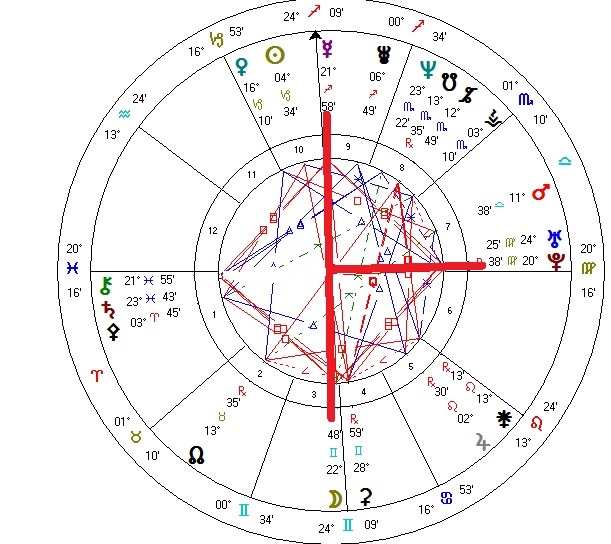 A T-Square occurs in an astrological chart when two planets oppose each other, and each squares a third planet. When drawn out on a chart wheel, it looks like a right-angle triangle. A T-Square is like a Grand Cross that’s missing one planet.

Like the Grand Cross, this configuration produces stress and obstacles, but the T-Square’s configuration puts more of an emphasis on the planet that is squared by the other two.

Squares and oppositions are both considered ‘hard’ aspects already -- they both create tension and friction. So if you put together the influences of two squares and an opposition that are shared among three planets, you can imagine the combined result -- highly fractious!

But while a T-Square can make life difficult, it also is a great motivator for change. This configuration pushes its bearer to do something about the obstacles it presents; to blast through them, by force if necessary, in order to move to a higher, less challenged plane of existence. And once those challenges are vanquished, the bearer can handle anything that comes their way.

If someone with a T-Square in their chart fails to make that critical breakthrough, they’ll be beset by conflict their whole life, within the realms of the three planets involved in the T-Square. But the good thing about this configuration is its motivational push for change.

It gives its bearer a drive unlike that of almost any other planetary configuration; it’s a major celestial challenge that, if accepted, can lead to greatness.