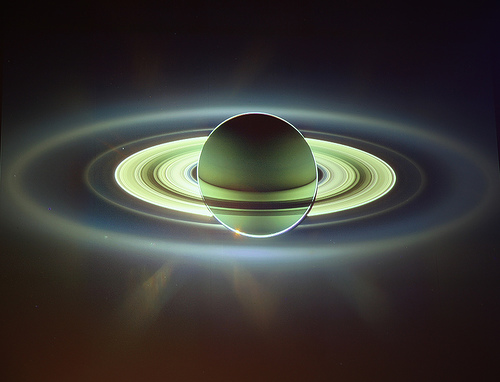 Saturn is a gaseous planet that happens to be very buoyant, because it is primarily composed of extremely light gases. Saturn could float in a galaxy-sized ocean, whereas all the other planets would either sink or disintegrate.

Saturn's interior is hot, and it radiates more energy than it receives from the Sun. Saturn has twenty-one moons, but it’s best known for its beautiful rings, which are clearly visible with a telescope. Saturn takes twenty-eight to twenty-nine years to orbit around the Sun, although a day on Saturn last only ten-and-a-half hours.

From Earth’s perspective, Saturn appears retrograde about 40% of the time -- almost half the year! During the retrograde period, internal discipline and structure are the focus. Restriction can mark the passing of Saturn’s retrograde motion over a sensitive spot on the natal chart -- areas that require concentrated effort to correct. When retrograde, Saturn is visible for much of the night, and is at its brightest.

Saturn is the outermost visible planet in our solar system, and has long been related to limits, boundaries, restrictions, time and reality.

Saturn’s return to its natal position every twenty-eight to twenty-nine years indicates the beginning of the cycle of adulthood as Saturn begins its journey around one’s chart for a second time.

The second Saturn Return occurs at ages fifty-six to fifty-eight, and is a time for reflection on the previous cycle of accomplishments and preparation for Saturn's third and final journey, the age of wisdom.