The idea of rulerships is a very old astrological concept. Each planet is said to ‘rule’ one or more astrological signs, meaning that the planet governs or is connected intimately to the characteristics of that sign. For most of astrology’s history, only the visible planets were known and used.

The traditional system of rulerships is a tidy, self-enclosed, integrated system that many astrologers still prefer to use today. In this system, the Sun and the Moon each rule only one sign: Leo and Cancer, respectively. All the other planets rule two signs, one by day and one by night: Mars rules Aries and Scorpio, Venus rules Taurus and Libra, Mercury rules Gemini and Virgo, Jupiter rules Sagittarius and Pisces, and Saturn rules both Capricorn and Aquarius.

Since the discovery of the three outermost planets, Uranus, Neptune and Pluto, the rulerships have changed somewhat. Uranus is now considered the ruler of Aquarius; Neptune is the modern-day ruler of Pisces, and Pluto is said to rule Scorpio.

A planet is considered to be at its strongest when it is located in the sign it rules. The planet is able to perform comfortably, in an environment that supports it and brings out its best traits.

A third feature of the traditional rulership system is called exaltations. There are certain signs in which any given planet is supported and strengthened. One of them is the sign the planet rules. Another is the sign of its exaltation. When a planet is in its exaltation, it is said to be ‘an honored guest.’ That is, the planet has many privileges there and the positioning is basically quite beneficial, but there are still certain restrictions on the planet. Nonetheless, it’s considered a strengthening influence secondary only to rulership.

The Sun is exalted in Aries, and the Moon in comfort-loving Taurus. Mercury is exalted in Virgo, one of the signs it also rules. Venus is exalted when in sweet Pisces, and Mars when in Capricorn, which steadies and directs Mars’s forceful energy. Jupiter is exalted in Cancer, and Saturn in Libra. The newer planets, Uranus, Neptune and Pluto, do not have exaltations, although some astrologers have assigned them.

It’s important to remember that these terms are not judgmental terms, and refer only to a planet’s strength or lack of it. Planets are strongest -- that is, their best qualities are emphasized -- when in their signs of rulership and exaltation.

‘Detriment’ is another term in the traditional astrology rulership technique that is used to determine the relative strength of planets. A planet is in detriment when it is in the sign opposite to the sign it rules. For instance, Mars rules Aries. When Mars is in Libra, the sign opposite to Aries, Mars is said to be in detriment. This simply means that the qualities of Mars are not strengthened when it is in Libra, and it’s easy to see why! Mars is strong and decisive, while Libra tends to vacillate and equivocate. Mars feel frustrated and tentative while in Libra. And so it is with all the planets in their detriment: They are simply not able to utilize their strengths properly. The planets are not supported in the sign of their detriment. 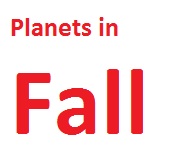 It’s important to remember that these terms are not judgmental terms, and refer only to a planet’s strength or lack of it. When a planet is in the sign of its detriment or its fall, the energy of the planet is not supported by the sign. The planet is not able to act freely. Therefore, these are considered weakened positions for any planet.