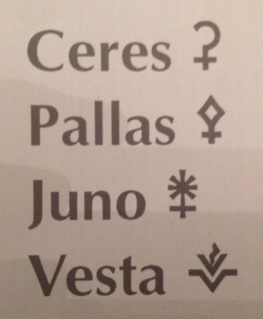 Have you ever noticed how most of the planets in astrology seem to have masculine qualities? With the notable exception of the Moon and Venus, which are distinctly feminine, our planetary panoply is majorly male.

All that changed on January 1, 1801, when the asteroid Ceres was discovered in between the orbits of Mars and Jupiter. And that was just the beginning! Several more asteroids were discovered in short order, in what is now called the Asteroid Belt.

As our instruments improved, we continued to find them. Currently, over 30,000 asteroids have been found and over 10,000 have names -- and we’re still discovering more! Now, that’s an awful lot of asteroids; too many to use in any sort of practical matter.

Asteroids are small and rocky, and do not qualify as planets. However, the larger ones have distinct qualities associated with them, astrologically speaking. Astrologers use the four largest asteroids -- Ceres, Juno, Vesta and Pallas Athena -- as feminine archetypes.

In addition, many astrologers add Chiron (pronounced KY-ron) to the mix. This maverick asteroid was discovered in 1977 and correlates strongly with the healing principle.

Many astrologers find that using the asteroids adds a whole new level of information and interpretation to their work with astrology.